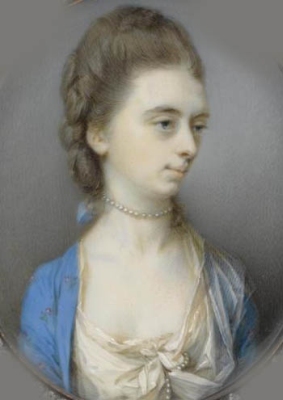 Lady Emily Maria Margaret FitzGerald was born on 15 March 1751.1 She was the daughter of Lt.-Gen. James FitzGerald, 1st Duke of Leinster and Lady Emilia Mary Lennox.1 She married Charles Coote, 1st Earl of Bellomont, son of Charles Coote and Prudence Geering, on 20 August 1774 at Black Rock, County Dublin, IrelandG.1 She died on 8 April 1818 at age 67 at Penzance, Cornwall, EnglandG.1
From 20 August 1774, her married name became Coote.1 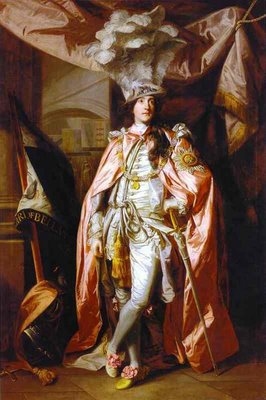 Charles Coote, 1st Earl of Bellomont
by Sir Joshua Reynolds, 1773 2
Charles Coote, 1st Earl of Bellomont was baptised on 12 April 1736.1 He was the son of Charles Coote and Prudence Geering.1 He married Lady Emily Maria Margaret FitzGerald, daughter of Lt.-Gen. James FitzGerald, 1st Duke of Leinster and Lady Emilia Mary Lennox, on 20 August 1774 at Black Rock, County Dublin, IrelandG.1 He died on 20 October 1800 at age 64 at Dublin, County Dublin, IrelandG, from inflammation of the lungs, without legitimate surviving male issue.1 His will was proven (by probate) in 1802.1
He held the office of Member of Parliament (M.P.) for County Cavan between 1761 and 1766.1 He was appointed Knight, Order of the Bath (K.B.) on 16 January 1764.1 He held the office of Deputy Quartermaster-General of the Forces between October 1766 and 1773.1 He was created 1st Earl of Bellomont, in our Kingdom of Ireland [Ireland] on 4 September 1767, but actually spelled Bellamont in the creation.1 In January 1771 he inherited the estates of Birtsmorton and Berrow.1 On 2 February 1773 he fought a duel with George Townshend, 1st Marquis Townshend, where he was badly wounded with a bullet in the groin.3 He was created 1st Baronet Coote Great Britain on 12 May 1774, with special remainder to Charles Coote of Donybrook, co. Dublin.1 He was appointed Privy Counsellor (P.C.) [Ireland] on 19 December 1774.1 He succeeded as the 5th Lord Coote, Baron of Coloony, co. Sligo [I., 1660] on 10 February 1776.4 He held the office of Custos Rotulorum of County Cavan between 1780 and 1800.1 He held the office of Joint Postmaster-General [Ireland] between 1789 and 1797.1 He lived at Coote Hill, County Cavan, IrelandG.1 He had eleven other children by five different women over and above the 2nd Baronet.5
On his death, both of his peerages became extinct, although his baronetcy passed to illegitimate son, Charles Coote, of Dublin.1
Sketches of Irish political Characters describes him as "a man of gallantry and high spirits ... His Lordship is possessed of a strong mind, some reading and much observation: he opposes the Union, although a member of the Privy Council. As a speaker he is of little consideration; his manner is disgustinglyt pompous... His Lordship publishes his own speeches!"3 Gibbs writes that "one of his 'gallantries' appears to have been the seduction of a reputable tradesman's daughter under cover of a sham marriage, his servant performing the service disguised as a parson."3