Edward I 'Longshanks', King of England1 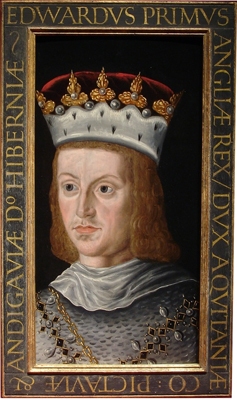 King Edward I of England
by Renold Elstrick 2
Edward I 'Longshanks', King of England was born on 17 June 1239 at Palace of Westminster, Westminster, London, EnglandG.3 He was the son of Henry III, King of England and Eleanor of Provence. He was baptised on 21 June 1239 by Eudes, the Pope's legate.4 He married, firstly, Eleanor de Castilla, Comtesse de Ponthieu, daughter of Fernando III, Rey de Castilla y León and Jeanne d'Aumale, Comtesse de Ponthieu, on 18 October 1254 at Abbey of Las Huelgas, Burgos, Castile, SpainG.5 He married, secondly, Marguerite de France, daughter of Philippe III, Roi de France and Marie de Brabant, on 10 September 1299 at Canterbury Cathedral, Canterbury, Kent, EnglandG.1 He died on 7 July 1307 at age 68 at Burgh by Sands, Cumberland, EnglandG, from dysentry, while marching against the Scots.6 He was buried at Westminster Abbey, Westminster, London, EnglandG.6
He gained the title of Duke of Gascony in 1254.5 He was created 1st Earl of Chester [England] on 14 February 1253/54.4 He fought in the Battle of Lewes on 14 May 1264, where he was taken priosner by the rebellious barons.4 On 24 December 1264 he was forced the deliver the Earldom of Chester into the hands of Simon de Montfort, Earl of Leicester, but received it back on 4 August 1265 on the death of Simon.4 He succeeded as the King Edward I of England on 20 November 1272.5 He was crowned King of England on 19 August 1274 at Westminster Abbey, Westminster, London, EnglandG, and styled 'Rex Angliae, Dominus Hiberniae et Dux Aquitaniae.7'
Edward towered over his contemporaries - he was the then rare height of six feet two inches. He was on a Crusade at the time of his accession and returned to England in 1274. Reigning for 35 years he was a strong and wise King. He married Eleanor of Castille and, after her death Margaret, daughter of Phillip III of France. Edward had 16 children by Eleanor and three by Margaret, the most of any Monarch. He carried out much needed reform and clarification of the law. Starting in 1277 he set out to resolve the Welsh problem which had proved so troublesome in Henry III's reign. The area around Snowdon and Anglesy harboured Llewelyn and other warlike princes. Llewelyn was killed in battle and the Welsh resistance collapsed. The Statute of Wales in 1284 arranged for administration under a mixed English and Welsh law. Castles were built to secure the Principality, including Caernarvon where Edward's son (Edward) was born and who was created Prince of Wales in 1301. During his campaign in Wales, it was found that the long bow used by the Southern Welsh, was an amazingly effective weapon which would revolutionise forthcoming conflicts. Edward next marched on Scotland and won a crushing victory at Falkirk but Robert Bruce arose and made himself King of Scotland. Although known as The Hammer of the Scots, Edward had not succeeded in subjugating that noble land. Edward may be best remembered by the Model Parliament called in 1295. He has an extensive biographical entry in the Dictionary of National Biography.8

Children of Edward I 'Longshanks', King of England and Marguerite de France

F, #101904, b. circa 1244, d. 28 November 1290
Last Edited=5 Dec 2008
Consanguinity Index=1.42%
Eleanor de Castilla, Comtesse de Ponthieu was born circa 1244 at Castile, SpainG.2 She was the daughter of Fernando III, Rey de Castilla y León and Jeanne d'Aumale, Comtesse de Ponthieu.1 She married Edward I 'Longshanks', King of England, son of Henry III, King of England and Eleanor of Provence, on 18 October 1254 at Abbey of Las Huelgas, Burgos, Castile, SpainG.2 She died on 28 November 1290 at Harby, Nottinghamshire, EnglandG.2 She was buried at Westminster Abbey, Westminster, London, EnglandG.2
She was also known as Eleanor of Castile.3 She gained the title of Queen Consort Eleanor of England on 19 August 1274.2 She gained the title of Comtesse de Montreuil in March 1279. She gained the title of Comtesse de Ponthieu in March 1279.2

F, #101910, b. circa April 1272, d. 23 April 1307
Last Edited=21 Jan 2011
Consanguinity Index=1.4%
Joan of Acre was born circa April 1272 at Acre, IsraelG.2 She was the daughter of Edward I 'Longshanks', King of England and Eleanor de Castilla, Comtesse de Ponthieu. She married, firstly, Gilbert de Clare, 6th Earl of Gloucester and Hertford, son of Richard de Clare, 5th Earl of Gloucester and Hertford and Matilda de Lacy, on 30 April 1290 at Westminster Abbey, Westminster, London, EnglandG.2 She married, secondly, Ralph de Monthermer, Earl of Gloucester before 2 August 1297, without her father's consent, although this was pardoned on 2 August 1297. She died on 23 April 1307 at Clare, Suffolk, EnglandG.3 She was buried at Priory Church of the Austin Friars, Clare, Suffolk, EnglandG.3
She was also known as Joan Plantagenet.4 From 30 April 1290, her married name became de Clare. From 1297, her married name became Monthermer.

Children of Joan of Acre and Gilbert de Clare, 6th Earl of Gloucester and Hertford

Children of Joan of Acre and Ralph de Monthermer, Earl of Gloucester