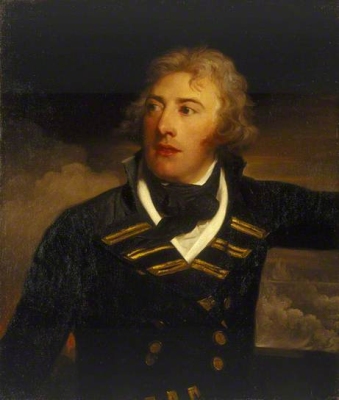 Vice-Admiral Hon. Sir Joseph Yorke
by Henri Pierre Danloup, 1795 2
Vice-Admiral Hon. Sir Joseph Sidney Yorke was born on 6 June 1768.3 He was the son of Hon. Charles Yorke and Agneta Johnston.4 He married, firstly, Elizabeth Weake Rattray, daughter of James Rattray of Atherston, on 29 March 1798.4 He married, secondly, Lady Urania Anne Paulet, daughter of George Paulet, 12th Marquess of Winchester and Martha Ingoldsby, on 22 May 1813.1 He died on 5 May 1831 at age 62, accidentally drowned off his yacht in the Hamble River.1
He was appointed Knight Commander, Order of the Bath (K.C.B.)1 He held the office of Member of Parliament (M.P.)3 He gained the rank of Vice-Admiral.3