M, #157574, b. 3 March 1766, d. 1799
Last Edited=16 Apr 2006
Matthew Quintal was born on 3 March 1766 at Padstow, Cornwall, EnglandG.1 He died in 1799 at Pitcairn IslandG.1
He gained the rank of Able Seaman in the Royal Navy, on board H.M.A.V. Bounty.2 He and Tevarua (?) were associated circa 1789 at Pitcairn IslandG.3 He and Teraura (?) were associated at Pitcairn IslandG.4
His mother died when he was young, and he lived with an uncle for two years. After two years at Plymouth with his father, he shipped aboard the sloop-of-war, H.M.S. Nymphas as servant to his uncle, a gunner. After his uncle's death, he was appointed servant to the Captain of a man-o-war, serving three years. There is no question that he was one of the most violent of the crewmembers and Pitcairn residents. He had a permanent attachment to Tahiti, and had no particular interest in returning to England. Although it is interesting to note that he, more than any other Pitcairn mutineer, not only named his consort after his mother, but each of his children is named for a member of his family. Not the act of a man with no feelings for family. On 10 Mar 1788, Quintal became the first person on board the Bounty to feel the lash. Upon complaint to Bligh by Fryer, he was given two dozen lashes for insolence and mutinous behavior. He was the first crewman approached by Christian concerning the mutiny. Initially he was frightened of the possible consequences, but after Martin overheard and agreed, he became an ardent supporter of Christian. After the Pitcairn landing, he favored destroying the Bounty, and, while the others discussed it, he went below and set the ship on fire. Like McCoy, who appears to have been a friend of his prior to his time on the Bounty, the introduction of liquor on Pitcairn affected him badly. As an instance of his ferocious nature, the story is handed down that one day his wife went fishing, and not succeeding in catching enough to satisfy Quintal, he flew into a rage abusing her unendingly, and finally bit off her ear. In 1799, in a drunken rage, he threatened to kill all of Christian's children unless he could take Isabella, his widow, as a wife. Adams and Young refused his demand, and realized that their lives and the lives of many other were in danger, and decided that something had to be done. They invited him to Adams' house, at which time he was set upon and overpowered by the two men. By means of a hatchet, the dreadful work of his execution was soon completed. The dreadful scene was eyewitnessed by 9-year-old Elizabeth Mills.1

Children of Matthew Quintal and Tevarua (?)

Child of Matthew Quintal and Teraura (?) 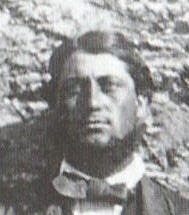 M, #157579, b. 1791, d. September 1814
Last Edited=26 Jan 2019
Matthew Quintal was born in 1791 at Pitcairn IslandG.2 He was the son of Matthew Quintal and Tevarua (?)1 He married Elizabeth Mills, daughter of John Mills and Vahineatua (?), in 1811 at Pitcairn IslandG.1 He died in September 1814 at Pitcairn IslandG.1
As a child, it was he who found a clasp knife on the island. There had been two ships that stood by the island with crews coming ashore to pick coconuts. The crews were unaware of the island inhabitants. This was a year or so after Folgar's visit in 1808.
'On a day in September of 1814, most of the young men of the village went out in their canoes to fish. They were mostly within speaking distance of one another, but Matt was not seen tending his canoe, and the others thought he was lying down in it. It was afterwards discovered that the canoe was, and had been for no one knew how long, floating around without an occupant. He had apparently fallen overboard, making no sound, and his body had sunk and was never seen again.2'