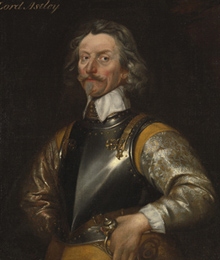 Jacob Astley, 1st Baron Astley of Reading 2
Jacob Astley, 1st Baron Astley of Reading was born in 1579.3 He was the son of Isaac Astley and Mary Waldegrave.1 He married Agnes Imple, daughter of Henry Imple.1 He died in February 1651/52 at the Old Palace, Maidstone, Kent, EnglandG.1 He was buried at Maidstone, Kent, EnglandG.1
He was appointed Knight on 17 July 1624.1 He held the office of Governor of Plymouth in 1638.1 He fought in the campaign against the Scots in 1640.1 He was Colonel of the 3rd Regiment of Foot in 1640.1 He gained the rank of Serjeant Major General in 1642 in the King's Army.1 He fought in the Battle of Edgehill, where he was wounded.1 He was created 1st Baron Astley of Reading, Berkshire [England] on 4 November 1644.1 He gained the rank of Battle of Naseby in 1645 in the where he commanded, and "performed his part with great gallantry."1 He held the office of Governor of Reading.1 He was Commander of the King's Infantry in 1645.1 In 1646 at Stow-on-the-Wold, Gloucestershire, EnglandG, he was taken prisoner. He was released soon after, on being admitted 'to composition.1' He has an extensive biographical entry in the Dictionary of National Biography.3

He had four younger sons, who all died without issue.4