F, #407822, b. 1863
Last Edited=15 Jul 2018
Edith Jacobs was born in 1863.1 She was the daughter of William Jacobs and Mary Heaton.1 She married Robert Bruce Fitzmaurice, son of Gamaliel FitzMaurice and Isabella Bruce, in December 1890 at Kensington, London, England.1
From December 1890, her married name became Fitzmaurice.1

M, #407825, b. 14 February 1783, d. 14 December 1855
Last Edited=18 Jan 2018
Charles de laet Waldo-Sibthorp was born on 14 February 1783.2 He was the son of Humphrey Waldo-Sibthorp and Susannah Ellison.2 He married Maria Ponsonby Tottenham, daughter of Ponsonby Tottenham and Arabella Leigh, in 1812. He died on 14 December 1855 at age 72 at Eaton Square, London, England.2
By 1826 Charles had been elected Member of Parliament for Lincoln, thus following his father, his brother and his great-uncle, and like them he became colonel of the South Lincolnshire Militia. The Gentleman's Magazine for January 1856 remarks: ' Colonel Sibthorp ever retained a strong affection for his original profession —shown in the ardour and profuse liberality with which he en¬deavoured to advance to perfection the militia regiment of his county after his appointment as colonel.' He was a deputy-lieu¬tenant of the county and a magistrate. He possessed great personal as well as family influence and was popular due to his habit of ' calling a spade a spade.'
His election to Parliament came at the time of the debates on the Reform Bill. He opposed it in all its stages, though the clause regarding better provision for the residence of clergy and enabling their widows to retain possession for two months after the death of their husbands is said to have originated with him. Despite his personal influence, and although according to a letter-writer of the time ' no one could kiss the girls better than Sibthorp at the last election,' he lost his seat at the next election, being defeated by Sir Edward Bulwer, who later became the famous author Lord Lytton. His popularity among the ladies of Lincoln led them to present him with a costly diamond ring, hallmarked 1832 and inscribed ' The ornament and reward of integrity presented to Charles de Laet Waldo Sibthorp by the grateful people of Lincoln, Christmas 1832.' The ring and other Sibthorp relics can be seen in the Usher gallery, Lincoln, which also contains many paintings by Peter de Wint collected by former Sibthorps and given to the city by later members of this well-known local family.

Two years later Colonel Sibthorpe was re-elected and continued to represent Lincoln until his death in 1855. Those were the days of the rotten boroughs and absentee members , but almost every day when parliament was sitting he could be seen in his place listening attentively to business, ready to spring to his feet in defence of the old order ' of rural life which was rapidly disappearing as machinery became popular and industrialism spread. He was punctual and indefatigable and his bitterest opponents paid tribute is honesty of purpose. Completely sincere, no prospect of place, our or pension could induce the colonel to vote contrary to his lion. Sir Robert Peel once said of him ' There goes a man who is always fearlessly and solitarily wrong,' but it was with Peel's sup-that he was able to carry his amendment to Melbourne's proposal to grant £50,000 to the Prince Consort as a yearly allowance. Rising to his feet, standing rigidly erect and emphasizing his remarks violent jerks of his huge square gold-mounted quizzing glass, he denounced the proposal as a ' Whig job ' and succeeded in getting the allowance reduced to £30,000 a year. This served to ease Queen Victoria's dislike of the colonel, who a few months earlier had asked why England should pay the expenses of the visit the prince of Saxe-Coburg to this country. She had been most )annoyed and had said ' We have been most distressed by the ill-red remarks of the member for Lincoln, and as long as Colonel Sibthorp is the representative of Lincoln We shall decline to visit loyal and ancient city.' And she never did!

At the time of the debates on the emancipation of the slaves there a group in the House known as the Saints. Colonel Sibthorp of this group, whose leader was Wilberforce. In his diary Charles Greville tells a story that throws a light on the character of this un-usual man: ' I sat next to Stanley, who told me a story which amused me. Macintosh in the course of the recent debates went to House of Commons at eleven in the morning to take a place. They were all taken on the benches below the gangway, and on asking the doorkeeper how they happened to be all taken so early yid ` Oh sir, there is no chance of getting a place, for Colonel Sibthorp sleeps at a tavern close by and comes here every morning by eight o'clock and takes places for all the Saints.' '

The years from 1830 to 1850 were years of acute agricultural depression. The corn laws of 1815, which had aimed at preserving farmers' monopoly of wheat, had brought untold misery to the labourers. Tenant farmers and those with small acreages also the pinch, and Cobbett had reported from Lincoln that the greater number of farmers in that area would be found to be in-solvent if they were to be sold up. Many Tories, including Lord Aberdeen, who had turned Free Trader, supported the move to repeal the corn laws, but Colonel Sibthorp made a furious attack on Peel's turncoat policy. The repeal came in 1846, the year when the railway mania was at its height. Among the many petitions to Parliament during that year was one presented by Lord Grimston, M.P., on behalf of the parishioners of North Mymms, who objected to the plans for a railroad to run through their parish. This petition had the utmost support from Colonel Sibthorp, especially when the engineer's plan showed the exact direction that would be taken by the proposed London to York railroad. But the petition was not allowed and the enginer, Cubitt, built the railroad exactly where and how he had planned. It cut through the orchard at Skimpans and it spanned with a hideous bridge the pleasant grassy track that led to Foxes Pit and Bell Bar and on to the turnpike along which, as a child, the colonel had travelled to Lincoln to visit his grand-parents. ' I hate the very name of railroad ' shouted the colonel, and in his loathing opposed its coming at all times both in and out of Parliament. Punch produced two cartoons at this time, one show¬ing the colonel as a mourner at the funeral of the corn laws and the other showing him as a ' bobby ' arresting a railway engine.

In 1851 Paxton built the Crystal Palace in Hyde Park to house the great exhibition planned by the Prince Consort. Queen Victoria was delighted with it all and Disraeli fulsomely called it ' that enchanted pile which the sagacious taste and prescient philanthropy of an accomplished and enlightened Prince have raised for the glory of England and the delight of two hemispheres,' but the colonel declared furiously ' 1 have never set foot . . . and nothing would induce me to go within a mile of that obscene and insanitary struc¬ture.'

When approaching his seventieth birthday, and although suffer¬ing from the effects of a mysterious accident, his attendance in the House was as regular and his outbursts were as frequent as ever. He was one of a minority of fifty-three who censured the Free Trade Bill introduced by Earl Grey in 1852. Punch depicted him as being one of Peel's ' dancing dogs,' but he was a man of strong, often misguided, convictions, a Tory champion of all that was gracious and peaceful in rural England, an individualist unlikely to ' dance ' to any man's tune. The autumn of 1855 saw the immaculate blue frock-coat and neat light cravat, the huge quizzing glass and the almost feminine display of flashing rings for the last time. A character passed from the House.2 He held the office of Member of Parliament (M.P.) for Lincoln in 1826. 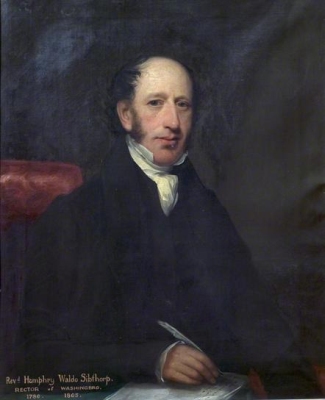